The She’s Connected Familylife Network does a study on Women ( in present times, in Bibletimes and in history) drawing life lessons from their lives. it is a monthly study.. So happy reading

The woman whose life we will be looking at today will remind us of all the holy women among God’s people who pass unnoticed.

THE BIBLE calls few men “prophet” and even fewer women “prophetess”. We can count the number of women prophetess by hand and one of such is who we are talking about today. The OLD TESTAMENT gives that title only to Miriam (the sister of Moses), Deborah (in the times of the Judges) and Hulda (in the days of King Josiah). In the New Testament we find something similar. Only one woman is explicitly called a “prophetess” and that was ANNA.

Anna the Prophetess was the daughter of a man named Phanuel who was of the tribe of Asher, one of the Twelve Tribes of Israel. She was one of the very, very few faithful Jewish women who believed with all her heart in the revelations of God in the Old Testament, and who awaited their fulfillment in the New Testament.

In the early years of the world, it was the custom to marry young and so, Anna was married when she was fourteen. She became a widow at twenty-one. Isn’t it tragic? She was barely an adult when life dealt her a blow. It wasn’t just that, Anna lived under the cruel reign of Herod the Great.

St Luke mentions her in his narrative about the presentation of the Child Jesus. Forty days after the baby’s birth, Joseph and Mary took him to the Temple to “present him to the Lord”.

Anna had been waiting many years for this moment. “She was now eighty-four years old and never left the Temple, serving God night and day with fasting and prayer. She came up just at that moment and began to praise God; and she spoke of the child to all who looked forward to the deliverance of Jerusalem.”

Blessed is Asher with children. May he be pleasing to his brothers and dip his foot in oil. Iron and copper are from your shoes and as your days so is your strength.

It is therefore not surprising to note that Anna was well advanced in years and also in good health when she met the Lord Jesus.

The world pays no attention to women such as Anna because they are thought to be old, dull, boring holy-holy women whereas they are just women who pray with greater devotion and more faith than all the other believers. Their faith is often treated as if it were a myth, as if it were no more than a refuge for the weak and humble.

Many Jews were in Jerusalem on the day when the prophecy of Malachi was fulfilled: “Suddenly the Lord whom you seek will come to his Temple. The messenger of the covenant, the one you long for, has arrived, says the God of Hosts.”

But they did not recognise the Baby Jesus. They had no idea that this child was their Saviour and Redeemer.

This is the point of Luke’s description of Anna-That old widow, who seemed to accomplish nothing of any use to society, was one of the few who had “eyes to see and ears to hear”.

While others saw just one more baby in a procession of babies being presented to the Lord, Anna saw what only eyes of faith could see: the Promised One.

As a prophetess, Anna receives insight into things that normally remain hidden to ordinary people; she recognizes who this child is and tells of his significance to selected people in Jerusalem. Her actions affirm Amos 3:7: “Surely the Sovereign Lord does nothing without revealing his plans to his servants the prophets.” 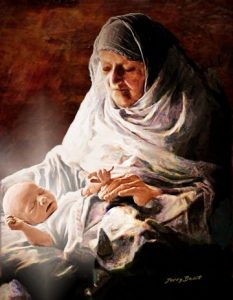 LIFE LESSONS FROM ANNA THE PROPHETESS

So friend, what other lessons did you learn from the life of Anna the Prophetess? feel free to share in the comment section below.